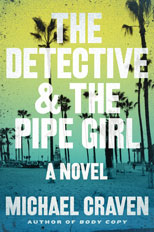 Nominated for both the Shamus Award for best P.I. novel of the year and the Nero Wolfe Award for best mystery of the year, THE DETECTIVE & THE PIPE GIRL was published by Harper Collins in 2014. It introduces private detective John Darvelle, a beer-drinking, ping-pong playing detective hired to find the ex-mistress of a famous film director. What starts as an easy assignment soon has Darvelle on a journey that puts him face-to-face with the LAPD, a ruthless underground crime operation, and a cold-blooded killer.

“A suspenseful, well-plotted neo-noir… Readers will want to see more of Darvelle—a quirky, thoughtful detective with a wry sense of humor and a philosophical bent.”
– Publishers Weekly (starred review)

“A terrific, fast-paced read… Michael Craven has captured perfectly the forbidden and deadly atmosphere of Hollywood at its darkest and deadliest.”
– New York Journal of Books

“This is the type of mystery that fans will cheer for… Mr. Craven, bring John Darvelle back!”
– Suspense Magazine